A postdoctoral researcher was synthesizing potentially explosive material in a fume hood, following a well-established procedure published in a peer-reviewed journal. The researcher was transferring a residual amount of the synthesized material using a plastic spatula when the material exploded in his hands. The shattered glassware caused some minor cuts to the researcher’s hands.

A UC Berkeley researcher was working in a lab with a highly corrosive sulfuric acid and hydrogen peroxide (piranha) solution to clean the surface of a glass sample in a fume hood.

ANSI-approved safety glasses—and other personal protective equipment specified in the Standard Operating Procedures (SOPs)—are essential whenever working with hazardous materials. SOPs also indicate other precautions that must be followed to ensure safety, such as performing work with energetic or explosive materials behind a fume hood sash or blast shield.

An employee was working in the bed of a large pickup truck. The truck was equipped with a Tommy Gate lift and hinged gate doors that opened outward. The employee was attempting to get down from the truck, so he placed his left hand on the door hinge and jumped down. His wedding ring caught on the grease fitting and caused an avulsion* injury of the finger, also referred to as “degloving.”

A chemistry researcher was using an older model hot plate to heat an oil bath to 120-150°F. He borrowed the hotplate from someone else and was not familiar with the temperature controls. On this particular hot plate the temperature dial could go around from “LO” to “OFF” and back to “HI” heat. The researcher thought he had turned the hotplate “OFF” but it was still in the “ON” position and 30 minutes later the mineral oil bath ignited.

A recent lab accident caused serious injury to a UCB graduate student due to an over-pressurization that caused a glass reactor to fail. Glass was sprayed at the researcher who received cuts to his lip, chin, chest, and serious cuts to his hands. 911 was called and the researcher was taken by ambulance to the hospital. The cuts to the hand were serious enough to require stitches and surgery on the palm.

Accidental Mixing of Bleach and Acid

In 2008 and 2009 UC Berkeley experienced two serious injuries resulting from falls from ladders.

Pressurized Dewar Cap is Blown Off and Causes Minor Injury

In July 2008, a guest scientist at the Lawrence Berkeley National Laboratory sustained a minor injury when the cap of a 50-Liter liquid nitrogen Dewar burst off and hit his forehead. The scientist needed to fill the Dewar - which hadn't been used for several months - and assumed it was depressurized because of its lack of use. 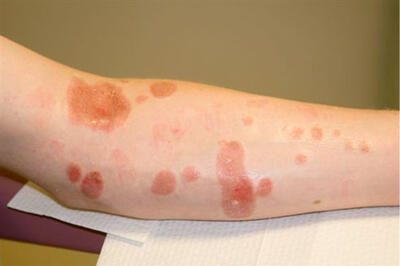 A 9.4 Tesla superconducting magnet, used for mass spectroscopy in a campus laboratory recently suffered a catastrophic failure. The incident was apparently caused by over-pressurization and failure of the liquid helium (LHe) chamber. Although there were no injuries because the incident occurred during off-hours, the potential for significant injury due to the venting of LHe into the facility was present. There was also significant damage to equipment associated with the magnet.

Exposure to Bromine During a Laboratory Refrigerator Clean-up

Discovery of an Old Container of Potentially Explosive Chemical

On April 11, 2007, an employee of Campus Recycling and Refuse Services was alarmed when a suspected compressed gas cylinder ruptured in the rear hopper of a garbage truck. The employee was standing at the rear of the truck and had activated the blade that sweeps the garbage from the hopper into the body of the truck for further compaction. The pressurized gas cylinder was believed to be concealed inside a plastic trash bag. The sweeping action of the blade ruptured the cylinder and the residual contents sprayed into the employee’s face.