The modern world is full of devices that, either directly or indirectly, act as sources of non-ionizing radiation (NIR). These sources produce NIR in the electromagnetic spectrum of wavelengths/frequencies ranging from 100 nm to static fields. Many NIR sources are present on the UC Berkeley campus, either in research applications or in ancillary equipment.

In general, NIR tends to be less hazardous to humans than ionizing radiation (ionizing radiation has a wavelength of less than 100 nm or a photon energy greater than 12.4 electron Volts). However, depending on the wavelength/frequency and the irradiance (or power density) value, NIR sources may present a human health hazard. This manual is intended to provide guidance in maintaining a safe NIR work environment on the campus. 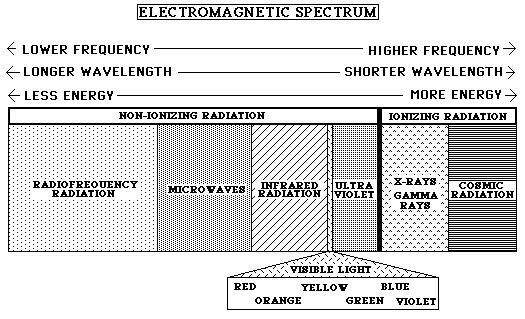 collapse all expand all

It is the policy of the University of California at Berkeley to provide a workplace safe from the known hazards of NIR by assuring compliance with federal and state safety regulations. Presently, it is not clear if Extremely Low Frequency (ELF) Radiation poses any hazard to human health. However, the ICRP Interim Guidelines on Limits to 50/60 Hz Electric and Magnetic Fields are used by the campus as a precaution. The NIR safety program is upgraded as new regulations and standards become available.

This policy applies to all persons exposed to NIR hazards on UC Berkeley property. The UC Berkeley Office of Environment, Health & Safety (EH&S) has been assigned responsibility for implementing the NIR safety policies established by the campus Non-Ionizing Radiation Safety Committee (NIRSC).

The California Code of Regulations (CCR, Title 8, Section 5085, Subchapter 7, Group 14, Article 104 – Nonionizing Radiation) establishes MPE (maximum permissible exposure) values for frequencies between 3 MHz and 300 GHz. At present, neither the state nor federal government regulates those frequencies below 3 MHz. The Institute of Electrical and Electronics Engineers (IEEE) C95.1 (1991) Standard recommends MPE values for frequencies between 3 MHz and 3 kHz. This standard is a revision of the American National Standard Institute (ANSI) C95.1 (1982) and is recognized by ANSI as the standard of safety practice.

The International Radiation Protection Association/International Non-Ionizing Radiation Committee (IRPA/INIRC) has published Interim Guidelines on Limits to 50/60 Hz Electric and Magnetic Fields. These guidelines are intended to limit the potential health effects of extremely low frequency (ELF is all frequencies below 3 kHz) radiation exposure. IRPA/INIRC recommends a continuous MPE of 1000 mG (0.1 mT) for exposure to uncontrolled environments over a lifetime. This standard agrees with the permissible magnetic flux exposure for persons wearing cardiac pacemakers recommended by the American Conference of Governmental Industrial Hygienists (ACGIH). NOTE: The ACGIH recommends the electrical field for persons wearing cardiac pacemakers not exceed 1.0 kV/m.

The Federal Communications Commission (FCC) publishes the OET 65 Standard which provides guidance on protection of workers and the public from microwave/RF radiation emissions from transmission towers and other broadcast facilities. The American National Standards Institute (ANSI) publishes the Z136.2 Standard for the Safe Use of Optical Fiber Communications Systems Utilizing Light Emitting Diodes.

Compliance with CCR Title 8 is required for all employers in the state of California. Enforcement of these regulations falls to Cal-OSHA, who inspects campus facilities to determine compliance with Title 8. Although the IEEE Standard is not a regulation, it does "...represent a consensus of the broad expertise on the subject within the institute..." and is commonly accepted within the United States as the safety guidance for frequencies between 3 MHz and 3 kHz. The IRPA Interim Guideline is the best guidance available on ELF safety that is based on international scientific consensus. The Swedish government has established a performance-based emission standard for computer monitor manufacturers (the MPR-II Standard allows a MPE of 2.5 mG), but the safety need for this standard has not been accepted by the international scientific community.

The properties and hazards of NIR can best be understood by considering the EM spectrum as three broad categories: