A chemistry researcher was using an older model hot plate to heat an oil bath to 120-150°F. He borrowed the hotplate from someone else and was not familiar with the temperature controls. On this particular hot plate the temperature dial could go around from “LO” to “OFF” and back to “HI” heat. The researcher thought he had turned the hotplate “OFF” but it was still in the “ON” position and 30 minutes later the mineral oil bath ignited.

Fortunately, the oil bath was in a fume hood which kept the flames and fire inside the hood, it was reasonably clean and no other chemicals ignited. Trying to extinguish the fire, the researcher used a CO2 extinguisher. The CO2 extinguished the fire briefly but the oil bath reignited. Next, the researcher tried to extinguish the fire by using liquid nitrogen to smother and cool the fire; however, when the liquid nitrogen (LN) was added to very hot oil, it expanded rapidly and caused the oil to splatter, burning the researcher. He used the nearby emergency shower to wash and cool the burns. UCPD was called and the injured researcher was taken by ambulance to the hospital. Fortunately, he was wearing a lab coat and safety glasses which limited his injuries to first and second degree burns on his hands and first degree burns on his face.

The oil bath fire was contained to the hood and it eventually burned out causing just minor smoke damage inside the hood.

The fire was caused by heating the mineral oil to its auto-ignition temperature. This occurred because the researcher was not aware that while he attempted to turn the hot plate off, the hot plate dial went past the “OFF” position to the “HI” position.

The misuse of the LN to extinguish the fire contributed to the injury. The use of LN, while capable of cooling the mineral oil fire and displacing oxygen, was inappropriate as the LN quickly expanded when immersed in the hot oil. The expanding nitrogen gas caused the hot mineral oil to splatter violently. LN is commonly used by chemistry researchers and it is considered a novel way to extinguish small fires. The CO2 extinguisher may have extinguished the fire if used properly, and the use of a multi-purpose dry chemical fire extinguisher would probably also have extinguished the burning oil fire. 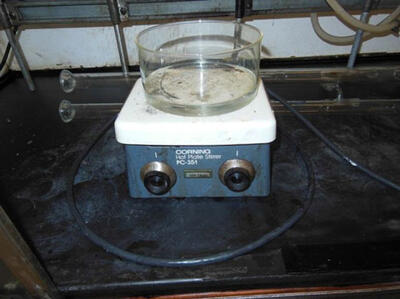 What Corrective Action Was Taken?

The lab’s personnel has gone through their lab and removed this type of old hot plate; it is a common type that can be found in many labs. They have also switched from using mineral oil in the oil bath to silicone oil that can handle higher temperatures and has a higher flash point.

The Campus has recently had several incidents of laboratory hot plates overheating. It is not clear if they were caused by operator error or the electrical components were not working properly. There are some hot plates that can get very hot, over 1000°F and researchers have returned to their labs and reported feeling radiant heat from hot plates inside hoods that they thought were turned “OFF”. To prevent these type of lab fires and injuries:

If you want training on proper selection and use of fire extinguishers please contact EHS. EHS has two types of training, classroom and hands on, where attendees can use an extinguisher to extinguish a fire. You can learn more from our information sheet Are You Using the Right Type of Fire Extinguisher? or call EHS to discuss or schedule.