Pressurized Dewar Cap is Blown Off and Causes Minor Injury

In July 2008, a guest scientist at the Lawrence Berkeley National Laboratory sustained a minor injury when the cap of a 50-Liter liquid nitrogen Dewar burst off and hit his forehead. The scientist needed to fill the Dewar - which hadn't been used for several months - and assumed it was depressurized because of its lack of use.

Without wearing safety goggles or a face shield, the scientist attempted to verify the Dewar was depressurized by pulling a pressure relief plug. The relief plug was not designed to be manually operated (it did not have a pull ring), and it is probable that it never opened; the researcher could have correctly relieved the internal Dewar pressure by opening a vent valve.

The scientist proceeded to remove the clamp that holds the top valve assembly (instead of filling the Dewar through a safe fixed fill line). The valve assembly blew off and hit him, causing a laceration to the forehead between the eyes. Fortunately, neither eye was injured. During the investigation, it was noted that someone had removed the safety chain designed to keep the top from flying off (there was a warning label on the Dewar describing the use of the safety chain). Threading on the retaining collar bolt had also been worn down, so the original finger-tightened nut had been replaced with a tiny hex nut. 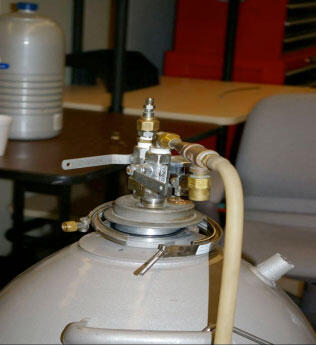 Special dewar for the delivery of nitrogen gas. The safety chain to the cap has been removed.