An undergraduate student researcher was working at the laboratory bench when the apparatus she was using exploded, sending glass fragments into her face and upper torso. The researcher was using a rotary evaporator (rotovap) to remove organic solvents from an azobenzene precipitate. She adjusted the bottom flask which then exploded sending glass towards her face, hitting her safety goggles and forehead. Lab personnel helped her to the safety shower and called 911. She was taken by ambulance to the hospital where she received stitches above her eyes and other treatment for her injuries. She was released from the hospital the same day.

What was the cause of the explosion?

Most likely, the explosion was caused by peroxide contaminants in the solvents that had concentrated to the point of being unstable. Both tetrahydrofuran (THF) and diethyl ether were used in the reaction, and both of these solvents form peroxides over time. In this case, the THF used did not contain a stabilizer (such as BHT) to slow the rate of peroxide formation and the four-liter bottle was nearly empty. A sample from the THF bottle was later analyzed with a simple test and found to contain excessive peroxides (more than 100 mg/l). The evaporation in the rotovap concentrated the peroxides in the bottom of the glass reaction vessel and any movement of the vessel could cause the now dry and shock-sensitive peroxide crystals to explode. 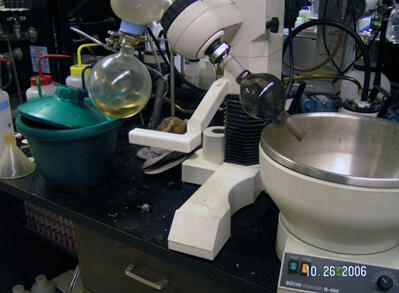 What corrective action has been taken?

Now that the lab has been cleaned-out ALL new peroxide-forming chemicals will be labeled with the date they are received and opened. Every two weeks there will be a safety inspection of all the lab space for a variety of items including verification that all chemical containers are labeled and properly stored.

One of the chemicals added in the reaction is referred to as Ethereal HCL, which is hydrochloric acid in ether. This material is >95% di-ethyl ether, which can form peroxides over time. Users of such materials in ether or THF should realize that peroxides could form.

Other changes are also being made because of this incident. EH&S and the College of Chemistry (CoC) Health and Safety Program are improving their guidance on safely working with peroxide forming chemicals. While primarily used in Chemistry, these materials are found in labs across campus. One change will be the addition of further training on peroxide formation to the laboratory safety training for new researchers. Also, EH&S plans to add peroxide formation information to the chemical inventory database, and it will identify HCl in ether as a potential peroxide former. Both CoC (for CoC researchers) and EH&S now offer the peroxide dip tip test strips for researchers to test for peroxides. Contact EH&S or call the College of Chemistry Health and Safety Program at 510-643-0648 for information on this service.

Contact EH&S to obtain appropriate labels. Use labels to indicate when containers of peroxide formers are received and opened.