In 2008 and 2009 UC Berkeley experienced two serious injuries resulting from falls from ladders.

During the summer a campus employee was disassembling equipment attached to a wall. He was using a wooden step ladder that had been left on-site by a contractor. He did not open the ladder and the ladder was lacking anti-skid material on its feet. The height of his stance on the ladder was approximately three to four feet from the concrete floor. The ladder, which was leaning against the wall, slipped and he fell to the floor and sustained a serious injury to his right arm/shoulder.

Cal/OSHA inspected the site and requested documents including IIPP, ladder training materials, and regularly scheduled safety committee meeting records. Documents show the employee had not been trained in the safe use of ladders. The department received a $19,125 fine as a result of the serious injury and lack of applicable training records. 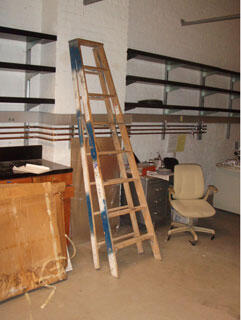 Ladder in place as it was used

In early 2008 a campus employee fell from a ladder and sustained a serious back injury. He was approximately three feet above the floor on a 10-foot ladder, and with the assistance of a student, was detaching a fluorescent light fixture from the ceiling. The employee is permanently disabled as a result of the incident. In this case, due to the weight of the fixture, scaffolding should have been used.

Cal/OSHA inspected the site and requested documents including IIPP, ladder training materials, and regularly scheduled safety committee meeting records. Documents showed the employee had read both a Ladder Safety Fact Sheet and a Job Safety Analysis (JSA) for the use of ladders. Thus the Department avoided a Cal/OSHA fine that would have been proposed at $18,000.