In February 2007, a University of California, Berkeley (UC Berkeley) researcher was loading a gas cylinder on a two-cylinder cart when the previously loaded cylinder fell and crushed his toes.

What was the cause of the accident? What were the contributing factors?

The most likely cause of this accident is the fact that this two-cylinder cart had no means to secure both cylinders independently. Therefore, when positioning the second cylinder on the cart, there was no way to secure the first cylinder. Loading the second cylinder puts the first cylinder at-risk for falling. Cal/OSHA, and good safety practices, require that compressed gas cylinders be transported in a manner to prevent them from tipping, falling, or rolling.

General Industry Safety Orders §4650. Storage, Handling, and Use of Cylinders.
(e) Compressed gas cylinders shall be stored or transported in a manner to prevent them from creating a hazard by tipping, falling, or rolling.

Cylinders are transportable, but potentially dangerous if not handled properly. They have a significant risk of falling when left unrestrained.

A secondary cause of the accident was that the victim did not recognize the potential for this accident. In the course of the investigation, the victim reported a history of several near misses specific to almost dropping the second cylinder during transfers. Had the near-miss potential been analyzed, this accident might have been prevented.

Look for these features on carts that are designed to transport two or more cylinders. 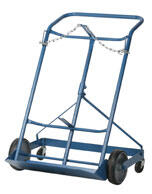 Note: When transporting cylinders, one chain is sufficient to secure the cylinder(s).